The U.S. intends to increase competition for contracts by reaching out to “medium-sized” businesses that can’t use incentives reserved forsmaller firms and aren’t large enough to compete against the biggest vendors.

The General Services Administration, the agency that bought $52 billion in goods and services for the federal government last year, plans to focus on the issue in May, officials said.

“There are numerous businesses all over the country that have never seriously considered entering into the government market,” said Chuck Schadl, director of the Georgia Tech Procurement Assistance Center in Atlanta. “Nobody has ever reached out to them before.”

Many medium-sized companies, a difficult-to-define segment GSA officials dubbed the “missing middle,” haven’t bid for government work because of misconceptions, a lack of knowledge about the process or a perception of bureaucratic gridlock, business owners and agency officials said.

Companies with more than $35 million in annual revenue or more than 500 employees typically can’t qualify for government programs aimed at steering federal contracts to small business.

A planned series of workshops is intended to help companies win GSA orders by explaining the benefits of selling to the federal marketplace, subcontracting opportunities and partnering with large vendors, they said.

The workshop series begins in ten locations across the country over the year, agency officials said.  Each week-long event will host 100 companies at little or no cost, said Jiyoung Park, the GSA’s associate administrator of small business utilization.

GSA plans to emphasize the size of its procurement pool — $52 billion last year in so-called “schedule” contracts, government-wide acquisition and building leases and management. It will also present case studies on medium-sized companies that successfully maintained federal business, or adapted to changing needs from agencies.

“It’s often hard to predict the demand for products and services given budgetary constraints, given new legislation that may alter missions or eliminate or create programs, or given the confidential nature of work,” Park said.

Medium-sized businesses that are successful in the private sector may also be reluctant to seek out government work because of perceptions of bureaucratic slowdowns and an opaque bidding process, agency and company officials said.

“Most folks from a commercial background throw their arms up and say, ‘let’s forget it, it’s too long of a cycle, it’s too expensive for me to figure this out,’” said Michael Agrillo, executive vice president of Arlington, Virginia-based OnPoint Consulting Inc., a provider of computer network and cybersecurity services to civilian agencies.

Blackstone Technology Group opened its government practice in Washington in 2002. The San Francisco-based company’s federal contracts now account for 65 percent of its business, the result of starting out as a subcontractor, said Jesse O’Gorman, a partner in the company’s Arlington, Virginia office.

“A lot of businesses we’ve seen have never really considered government contract work before, and not necessarily for good reasons,” said. “Their impression is that government pays slow, and that’s not true at all.”

To contact the reporter on this story: Nishad Majmudar in Washington at nmajmudar@bloomberg.net

To contact the editor responsible for this story: Cary O’Reilly at caryoreilly@bloomberg.net 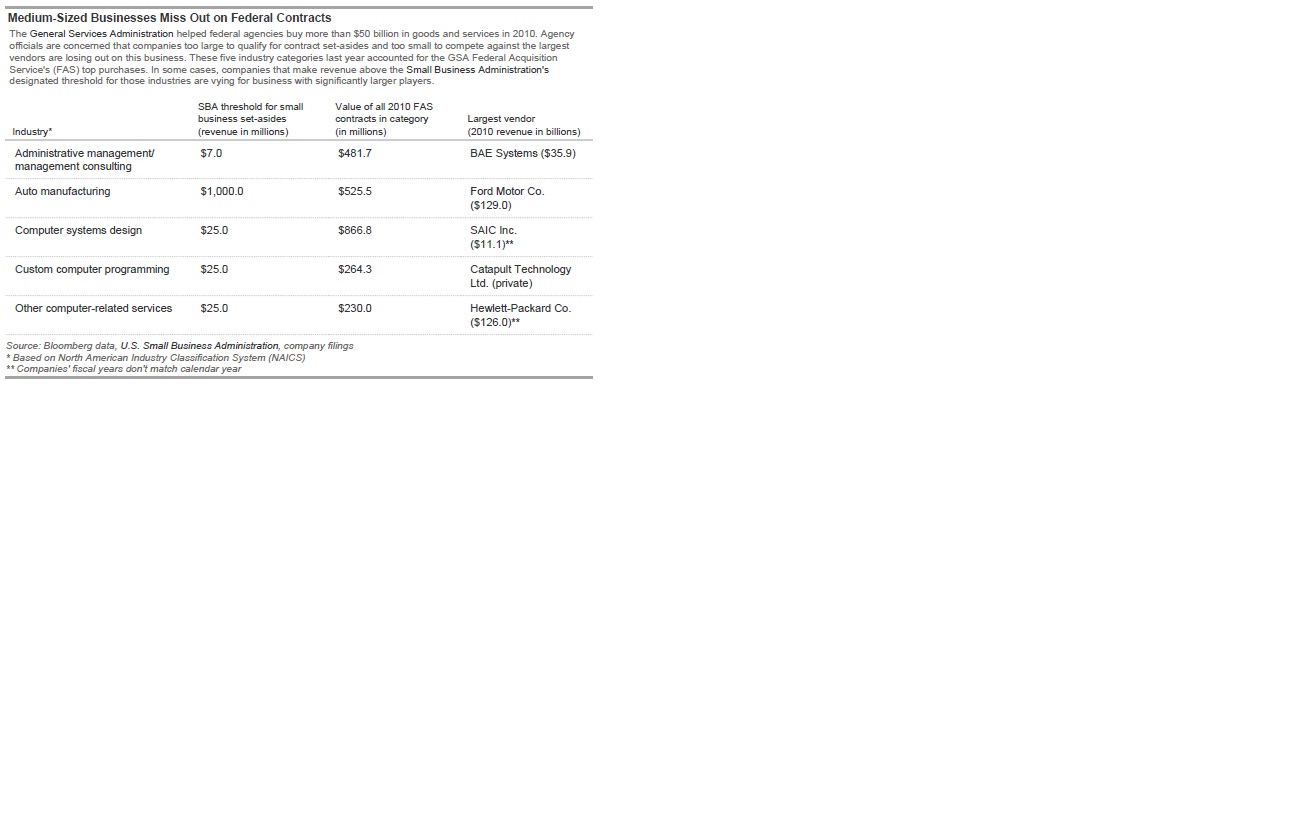