A new study of nearly 650 Georgia manufacturing companies underscores the importance of innovation as a competitive strategy – at a time when international outsourcing continues to impact Georgia’s manufacturing community. 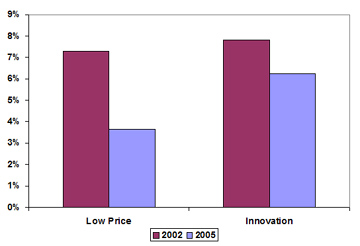 Georgia manufacturers that rely on innovation for their competitive edge reported returns on sales 50 percent higher than companies that compete by providing low cost products – a gap that grew substantially since the last survey in 2002. Innovative companies paid workers a third more than the average Georgia manufacturer and were 40 percent less likely to lose work to outsourcing than were companies competing on low cost.

The survey of Georgia manufacturers, part of a periodic study begun more than a decade ago, was conducted by the Enterprise Innovation Institute and the School of Public Policy at the Georgia Institute of Technology.

“Innovation, whether in products or processes, or in organization or services to customers, is one of the main paths through which manufacturers can become more distinctive, secure market premiums, satisfy customers, expand sales, reward workers and improve their bottom line,” explained Phil Shapira, a professor in Georgia Tech’s School of Public Policy and a study co-author. “Companies that do not continuously innovate will find themselves under increasing pressure from low-cost producers in the United States and globally.” 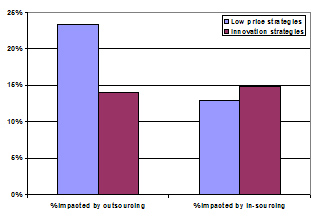 Offering innovative products gives companies a competitive edge that provides protection against outsourcing and allows them to charge a premium – which creates higher margins and allows higher wages, notes Jan Youtie, a researcher in Georgia Tech’s Enterprise Innovation Institute and another study co-author.

“If a company competes on the basis of innovation, that usually means only a few other companies are offering similar products,” she said.

After launching its iPod music player, for example, Apple Computer was able to charge a premium – and still commands a majority of the market. And Google has maintained a competitive edge by continuing to offer new products that build on its market-leading search engine, Youtie noted.

But innovation isn’t limited to products and processes. Companies can also compete using innovative marketing strategies and organizational approaches, she said. Aflac’s talking duck, for instance, provided a marketing innovation that helped the company stand out in the crowded health insurance market.

“The benefits to innovation are pretty much across the board for companies in quality of goods, variety of goods, market share, increased capacity, reduced time for product delivery, improved production flexibility – and reduced inputs of materials, labor and energy,” she noted.

But there are barriers to innovation that involve costs, capabilities and risks that may keep some companies away.

“It’s not just a matter of money,” Youtie said. “There are also issues with having qualified personnel to undertake the innovation, seeing the need in the marketplace, and overcoming a concern that innovative products cannot penetrate markets dominated by established companies.”

“Without more innovation in Georgia, manufacturers abroad will steadily out-compete us by having better products and more efficient processes,” Shapira warned. “This is a particular concern for Georgia’s base of small and mid-sized companies. While we have many excellent small firms in the state, we lack the large base of innovative, specialized and flexible small manufacturers seen in some other advanced industrial economies.”

Fewer than 8 percent of companies responding to the survey chose to compete on innovation. However, a much larger percentage applied innovation to products and processes that were part of other strategies. The survey found that nearly half of Georgia manufacturers had introduced a new or significantly improved product between 2002 and 2004. Branch facilities of companies headquartered outside the state had the highest rate of new product introduction.

While innovation has traditionally been considered the business of large high-tech companies, Youtie noted that firms of all sizes – and in all technologies – can benefit. Traditional industries such as food processors can innovate in product packaging and marketing, while apparel and carpet firms might apply new finishes – perhaps based on nanotechnology – to differentiate their products.

Though small companies may lack the innovation resources and networks of larger competitors, they can often make decisions and implement changes more quickly, Youtie noted.

The percentage of companies competing on the basis of low cost declined from 27 percent in 2002 to 20 percent in 2004. Youtie and Shapira speculate that’s because many companies using that strategy have simply gone out of business.

“Low price will bring in more sales for a while, but it’s hard to keep that up,” Youtie noted. “You have to compete with companies in countries with even lower cost structures.”

For decision-makers, the study’s implications are clear. “Firms, industry associations, universities and state and local policymakers all need to be involved in new efforts to stimulate many more of our small, mid-sized and larger industrial enterprises to invest in the innovative strategies that will help them not only to survive, but also to grow,” Shapira said.

Other findings of the 2005 Georgia Manufacturing Survey included:

The survey was sent to approximately 4,000 Georgia manufacturers that had 10 or more employees. Completed surveys from 648 manufacturers were weighted to reflect employment and industry distributions.