“GTPAC” stands for the Georgia Tech Procurement Assistance Center, but in the small town of Bowdon, Ga., it means a whole lot more. 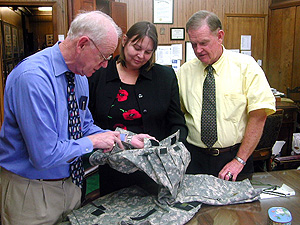 The GTPAC staff, specifically Jerry Shadinger, helped Bremen-Bowdon Manufacturing Co. win a U.S. government award to produce combat and military dress uniforms and outerwear. The multi-year, multi-million-dollar federal contract has helped keep the company in business, along with the 400 jobs it provides in a town of 1,840, said Elizabeth Plunkett-Buttimer, co-chair and co-CEO of the business started by her grandfather in the late ’40s.

“This kind of economic opportunity means a lot to a small town,” said Plunkett-Buttimer, who also serves as chair and CEO of a family-owned sister company, Bowdon Manufacturing Co. “It’s not numbers on a page, but people’s lives.”

Like most U.S. textile and apparel manufacturers, Bremen-Bowdon’s domestic retail customer base has been completely lost to inexpensive imports. The one remaining market is the U.S. government, which by law must secure a portion of its purchases from domestic sources.

“Georgia Tech has helped us in the process of reinventing our business by giving us very important leads as to contracts, when they would become available and how to go about doing business with the government,” Plunkett-Buttimer said.

She said GTPAC seminars on how to do business with the government have been particularly helpful for her companies’ strategic future.

“They have been instrumental in our transition from serving retail clothiers to serving the U.S. government,” she continued. “This transition was necessary for our survival and for maintaining these manufacturing jobs in the U.S.”

GTPAC was formed in 1985 to provide assistance to Georgia companies interested in marketing services and products to the federal government. Today the program provides assistance at federal, state and local government levels all at no cost to the businesses.

“We provide firms with information, guidance and assistance on the procurement process,” said Zack Osborne, program manager at GTPAC’s Warner Robins office.  “In addition to individual counseling, we conduct training exercises and seminars around the state about procurement rules and procedures, and how to find bidding opportunities.”

Prior to joining Georgia Tech 13 years ago, Osborne spent 28 years in procurement for the Air Force. His wealth of real-world experience is typical of GTPAC counselors, many of whom are retired from careers in government procurement. The GTPAC staff boasts a combined 270 years of government contracting experience.

In addition to Warner Robins, GTPAC counselors are stationed at offices in Albany,Atlanta, Augusta, Columbus, Rockmart and Savannah.

The GTPAC program, supported by the Defense Logistics Agency (DLA) and Georgia Tech’s Industry Services in Atlanta, is premised on a belief that government contracts sustain local economies by creating and saving jobs in Georgia. That conclusion is supported by the numbers: In 2004 alone, DLA estimates that 15,251 jobs were either saved or created in Georgia through the program, with nearly 2,000 of those jobs found in the manufacturing sector.

In addition, 267 of GTPAC’s 1,490 clients received government contracts worth a total of nearly $650 million last year, Osborne said. With an annual operating cost of about $921,000, which GTPAC shares equally with DLA, those figures translate into a return-on-investment of an astonishing 1,407 to 1, according to Osborne.

Over the past 20 years, GTPAC has helped Georgia companies earn contracts worth a combined $2.4 billion, he noted.

The level and amount of counseling provided by GTPAC varies with the individual companies’ needs. While some already have government experience and need limited help with specific areas of the process, Osborne said, the majority of GTPAC’s 1,500 clients are new to the government-procurement market and are primarily interested in broadening their customer base.

GTPAC may work with a company for one year or more before it receives its first government contract, Osborne said, but under GTPAC’s guidance along with a healthy dose of perseverance, many companies will eventually earn a contract of some kind.

“The hardest one to get is the first one,” he continued. “Later contracts come easier because the company has experience under its belt. And as companies become more comfortable and successful with the process, they need us less and less.”

The virtue of tenacity is exemplified by a Savannah, Ga.-based small business called Daniel Defense Inc. Owner and CEO Marty Daniel started the company in 1999 to specialize in the M-16 and M-4 weapons systems for military, law enforcement and civilian customers.

Two years ago, he learned there was a need for an improved aiming-support subsystem known as the Rail Interface System which would in turn fit a number of M-16 improvements sought by the Department of the Navy. Since the desired specifications were similar to some of Daniel’s products, he was encouraged to bid for the work. After designing a product which met the required specifications, Daniel contacted the GTPAC office in Savannah, where Osborne and Larry Blige provided comments and input that led to the final proposal.

“When we originally bid on this project, the solicitation was quite an undertaking,” recalled Daniel. “We needed some help with the technical portion to make sure we turned in what the government was used to seeing.”

He added, “We were on a tight schedule to complete the proposal. Zack came down from Warner Robins and worked with us through the weekend when it was down to the wire. We got the bid turned in about 30 minutes before UPS closed, but we got it in on time.”

After receiving notification of a pre-award survey to be conducted by the Defense Contract Management Agency, Daniel turned again to GTPAC. Counselors provided direct hands-on assistance by reviewing the pre-award item checklist onsite with Daniel and his subcontractors prior to the government review.  GTPAC also participated in the actual pre-award survey at Daniel’s request.

Earlier this year Daniel was notified that his company along with two others had been selected to share a $50 million contract and received purchase orders to produce a limited run of products for testing. The winner of the testing phase stands to receive the large production orders.

“Along with the contract were requirements for reports that had to be filed,” he said. “Zack and Larry were also a huge help with those contract documents.”

GTPAC’s assistance is not limited to military contractors, Osborne emphasized.

“A company may want to provide something for the U.S. Forest Service or the Department of State or some other department,” he said. “As long as it’s a governmental agency at some level, we’ll help them find a niche where they might be able to broaden their business base.”

Tony Richardson falls into that category. A commercial mortgage banker with 22 years of experience and a former assistant director of FDIC in Atlanta, Richardson founded a project management consulting firm, ARF Inc., 10 years ago.

Shortly after being established, AFR was certified as a small disadvantaged firm in the 8(a) program by the Small Business Administration (SBA). The SBA recommended thatRichardson seek additional specialized technical assistance in developing a marketing strategy and proposal preparation methodology for government contraction.

“Larry Selman and Larry Fountain from GTPAC have been tremendous with me throughout my entire career, Richardson said. “They have taught me government contracting, government regulations, how to do business with the federal government — and they have helped me land three major contracts.”

The most recent is a $12 million award from the U.S. Department of Housing and Urban Development (HUD) to perform inspections for new multi-family construction projects in eight states, Richardson said.

“You do most what you do best,” Richardson added. “My expertise is housing, and with GTPAC’s help, I’ve found my niche with the federal government.”