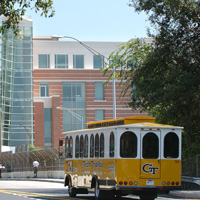 The report – Accelerating Economic Development Through University Technology Transfer – notes several factors that help states position their universities as centers of innovation and business growth, including strong academic leadership and research capabilities, availability of early stage capital, commitment to and support of entrepreneurship programs, and the existence of infrastructure such as innovation centers, incubators and research parks.

Georgia Tech was one of nine universities selected as a case study for the report.

The report states that, “Georgia Tech is one of the strongest universities in terms of its relationship with and assistance to industries of all sizes and its strong role in statewide economic development.”

Moreover, the level of private sector involvement in helping shape and direct these initiatives is stronger than in almost any institution in the country. Georgia actively solicits industry input through advisory boards and councils at its colleges and research centers, and this has helped shape the institution’s curriculum, R&D focus, and service orientation as well as encourage direct industry involvement.”

The report acknowledges that there are certain issues that must be worked through by institutions in regards to balancing academic life with the corporate need for commercial confidentiality. It cites Massachusetts Institute of Technology, Stanford University, Carnegie Mellon University, and Georgia Tech as institutions that appear to have found a balance between achieving academic excellence and pursuing technology transfer and commercialization goals.

The report notes the importance of having early stage capital and a good incubator system. Sam Florance, director of the Gateways Program at Purdue University, agrees. “We have found that those firms (in Purdue’s Research Park’s incubators) that don’t receive support in the early stages face a long, hard road. For those firms that do receive management, resource and technical support, they have about a 90 percent chance of a five-year survival.”

The study was conducted by Innovation Associates, of Reston, Va. on behalf of the Connecticut Technology Transfer and Commercialization Advisory Board of the Governor’s Competitiveness Council.